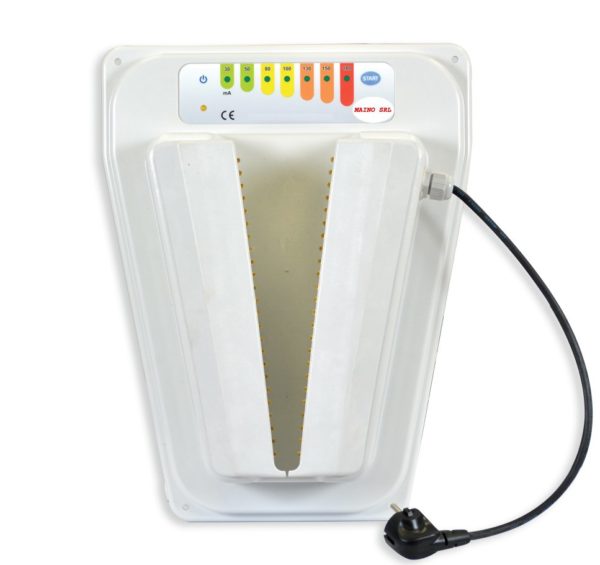 Electric stunner for poultry, palmipeds and game (hens, chickens, ducks, pheasants, partridges, quails, geese …) both of lean mass and of fat mass, it is also effective for the electronarcosis of rabbits. The device is equipped with automatic regulation of the electric discharge which is calculated when the animal is inserted between the electrodes. The operation is really simple, it allows you to stun the animal instantly and to record all the data on a USB stick, compliant with European Regulations no. 1099/2009.

Device with automated regulation of the electric discharge, it allows to stun the animal instantly.

How to use; the complete operation takes only a few moments:

The function is automatically managed by a microprocessor.

The device records and saves the data related to the current flow in a USB memory stick which can be removed to obtain a written documentation concerning the electronarcosis process with the date of application and the amount of current emitted.

The appliance is also effective for the electronarcosis of rabbits.

Note: The appliance complies with EU regulations, EEC Regulation 1099/2009 of September 24th 2009 concerning the welfare and protection of animals before their slaughter.

Warning VERY IMPORTANT!
1. During the whole stunning phase the animal must be held between the V-shaped electrodes so that it cannot wriggle, as on the other hand an overcurrent discharge could occur towards the control circuit which could lead to the breakdown of some components and the block of operation, a defect that can only be solved by returning to the service center for repair.
2. Particular attention must be paid when downloading the information recorded on the USB stick. The recording file MUST NOT be moved, overwritten or renamed, it MUST ONLY be copied to your PC and then used. Moving the file or its modification can cause the rewriting of incorrect information for the firmware, actions that lead to malfunctions that can no longer be repaired, except with the replacement of the entire motherboard (the most expensive part of the device) for a fee.